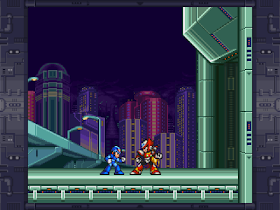 Genre: Action
Perspective: Side view
Gameplay: Shooter
Art: Anime / Manga
Setting: Sci-Fi / Futuristic
Published by: Virgin Interactive Entertainment (Europe) Ltd.
Developed by: Capcom Co.
Released: 1996
Platforms: SEGA Saturn, PlayStation (PSX, PS1), Super Nintendo (SNES)
Mega Man X3 follows its same alignment in terms of gameplay. Players continue to control X while battling Mavericks and as they move through obstacles and difficult terrain. Once the boss is eliminated, X copies the defeated boss's weapon. However, this game also releases the first playable aspect of Zero. Zero is used to play at the introductory level and can be used at certain moments of the game. It has a stronger variant of the X-Buster, the Z-Buster, which is capable of using up to four charge levels, the fourth charge level fires two fully loaded shots followed by a cut of the Z-Saber, the most powerful weapon in the game. Zero always starts with a fully updated life meter too. However, Zero is unable to have a fight with the bosses and automatically leaves when he approaches the boss's door and therefore can not have new weapons. As in the previous games, it is possible to get armor parts. In addition to the armor, the player can collect Improvement Chips that represent more updates for the pieces of the armor, giving X a wide range of abilities. However, if the player collects all the pieces of armor, but none of the improvement chips, it is possible to unlock a Golden Armor that provides all the powers of improvement automatically. Finally, if certain conditions are met, X can get Zero's Z-Saber, but at that moment, he can no longer be summoned to help during the rest of the game.

The Mavericks proliferate rapidly all over the world, threatening to annihilate the little remaining human existence on Earth. To prevent this, a Reploid named Dr. Doppler has created a powerful antivirus that will prevent the emergence of more Mavericks. To support their tests, the Doppler City (Doppler Town) is created to gather the Reploid test. To ensure human life in Doppler Town, the barracks of the Maverick Hunters relocate to this place. In the end it is revealed that everything was a trap of Dr. Doppler himself, all the Reploids and with the antivirus create new Mavericks and put themselves at the service of it. That same afternoon they organize an attack on the barracks of the Maverick Hunter, X and Zero manage to repel the attack and get ready to catch Doppler to reverse the chaos that has originated, when in the end it is discovered that Dr. Doopler was being manipulated deceptively for Sigma.

Godkarmachine Or Inary if you do not kill Bit or Bite both merge into this monster and his weakness of Ray Splasher.
Mosquitus can kill him with the Spinning Blade, you can use Zero to eliminate him and that way X can get the sword of Zero, which is a very powerful weapon against all his enemies.
Vile MK2 Golliath if you do not kill Vile he will return as the second head of the Doopler lab with his Golliath Ride Armor that an improved armor that Vile uses to finish off his Golliath Ride Armor uses the Parasite Bomb and then you finish it to Vile using the Ray Splasher that is his weakness.
Volt Kurageil his weakness is the Frost Shield.
Dr. Doopler is the penultimate boss of the game, you must be very careful when shooting him, he is immune to the X-Buster and also this absorbs your powers, with the purpose of regenerating, his weakness is the Acid Burst.
Sigma (phase 1) uses the Spinning Blade, which is his weakness.
Sigma (phase 2) only uses the X Buster loaded.
‹
›
Home
View web version