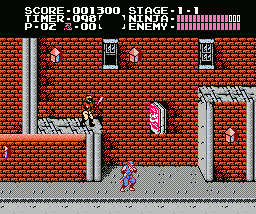 Genre: Action
Perspective: Side view
Visual: 2D scrolling
Gameplay: Arcade, Beat 'em up / Brawler
Published by: Tecmo
Developed by: Tecmo
Released: 1989
Platforms: Nintendo (NES), TurboGrafx / PC Engine, SEGA Master System, Super Nintendo (SNES), SEGA Genesis / Mega Drive
Ninja Gaiden - one of the best representatives of the genre Action Arcade for the NES platform. The game was released in 1989 by Tecmo and was a huge success for the players. At intervals of a year, two more parts emerged: "Ninja Gaiden II: The Dark Sword of Chaos" (1990) and "Ninja Gaiden III: The Ancient Ship of Doom" (1991).The game became popular due to the fact that, in addition to the standard attributes of any Action, there is a clear storyline that develops over two dozen stages. However, the main key to the popularity of the entire series of "Ninja Gaiden" is the presence of excellent animated intro that follow after passing each level of the game. Cutscenes will not allow you to break away from the screen and contribute to a deeper penetration into the game.From the opening intro we learn the background of the main character, the young ninja - Ryu Hayabus. The day after the disappearance of his father, Ryu discovers a letter addressed to him from the pope, in which he talks about a possible duel, in which his life is at stake. And in case he does not return, the father asks Ryu to take a family heirloom - the sword of the Dragon - and go to the USA in search of the archaeologist Walter Smith. From this moment the protagonist takes the path of revenge and goes to America.The graphics in the game are simply excellent, the main character and the enemies are drawn very cool. In general, everything at the highest level - screenshots will only confirm this. The musical accompaniment gives the game a ghostly and mysterious mood, which together with the introductions creates a special, holistic and realistic world of "Ninja Gaiden".But, still the most distinctive in the game, which most affects the suffering soul of any gamer is the gameplay. In the game, first of all, your excellent reaction and accuracy of jumps and strikes are valued. In case of a miss, the opponents immediately take advantage of the situation and try to reduce your entire life balance to zero. The passage of each stage is given a certain time, and this further makes the player mobilize and concentrate. Levels are difficult enough to pass, and sometimes you just have to run forward and swing with a sword counting on luck, because in case of the slightest delay on your part, the enemies immediately begin to attack violently, not giving the opportunity to defend themselves. It should be noted that "Ninja Gaiden" is one of the most difficult games for passing, it is all about time and around time. If you learn to appreciate time and do everything accurately and on time, you can go to the end and learn the answers to questions that the main character has set for himself.In the game, you can select power-ups that significantly expand your combat potential: from fireballs and the protection of the main character to the asterisk ninja. A variety of weapons, which in large numbers are represented in levels, makes it possible to deal with opponents in your preferred way.Excellent graphics, mysterious music, crazy gameplay and a great story with animated cutscenes made the "Ninja Gaiden" series one of the most popular for the NES platform. The popularity of the series was such that it had the honor of being re-released in 1995 for the SNES platform (called "Ninja Gaiden Trilogy version"), followed by another game for the XBOX platform in 2004 with the original name "Ninja Gaiden".The game was also published in paper form - as a book "Ninja Gaiden" from the series "Worlds of Power", which was published in the early nineties by Seth Godin. Equally curious is the fact that musical amateurs and professionals are still writing remix tracks based on basic musical themes from this great game, they can be found in large numbers in free access on the Internet.