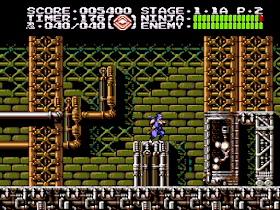 Genre: Action, Compilation
Perspective: Side view, Top-down
Art: Anime / manga
Gameplay: Arcade, Platform, Shooter
Setting: Cyberpunk / dark sci-fi
Narrative: Martial arts
Published by: Tecmo
Developed by: Tecmo
Released: 1995
Platform: Super Nintendo (SNES)
Three NES hits are now on SNES as one rom. When porting this product, the versions may have lost something, maybe acquired something, but most importantly, they retained their essence unchanged. Your ninja runs forward and eliminates any presented enemies with his sword, picks up various weapons on the battle path and changes his skills, which he immediately uses in an attack. After each level, there is a storyline and an exciting story in the form of all kinds of dialogues and showing the further actions of all kinds of characters, both good and bad. Only a few games can boast of such an interesting development of events. The main character of the game Ryu Hayabusa in his three adventures must unravel a chain of mysterious events that he cannot ignore, since they touched not only him, but also people dear to him. And thanks to his skills and the power of a skilled ninja, he no doubt takes on all sorts of dangerous adventures and with courage penetrates into all kinds of enemy places. The games have clearly improved graphically, the music sounds different in some places, and a password system appeared in the SNES version.