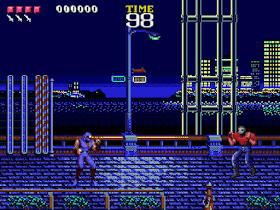 Genre: Action
Perspective: Side view
Visual: 2D scrolling
Gameplay: Beat 'em up / brawler
Published by: Tecmo
Developed by: Tecmo
Released: 1992
Platforms: SEGA Genesis / Mega Drive, SEGA Master System, Nintendo (NES), TurboGrafx / PC Engine
Today, the old games of the Ninja Gaiden series are associated among gamers, first of all, with the brilliant trilogy of platform games for the NES console. It is understandable, those games rightfully deserved their great fame, offering us a truly cinematic story with drama, betrayal, deceit and saving the world, packed into a seemingly standard platform gameplay. A peculiar combination, and it is not at all surprising that it became the basis for a whole series of games in various genres - there were platformers, slashers, and beat'em ups. Some of the projects in this series turned out to be very good (like the modern Ninja Gaiden 2, for example). But some were very weak. While everything that a good game should have, these games had at the core.
With the Ninja Gaiden series inherited from the NES, Sega acted in a very original way, releasing three different games for three of its platforms - one "ninja" was received by the Sega Master System, the pocket Sega Game Gear, TurboGrafx-16 and the famous Sega Genesis. All games were simply called Ninja Gaiden, without any serial numbers and subtitles, while each project had its own plot, and some were even made in other genres. The only thing in common was the main character - the famous ninja Ryu Hayabusa, who fights against a wide variety of evil and injustice.
In the case of the Sega Genesis version of Ninja Gaiden, the producers decided to move away from the famous eight-bit trilogy and moved towards the arcade version. The result is a fairly standard beat'em up, with a 2.5D perspective, with the ability to go a little deeper into the screen - just like in the games of the Double Dragon and Streets of Rage series.
However, in comparison with colleagues from a weaker platform, this Ninja Gaiden loses a lot. Firstly, the clumsy three-button combat system is not happy. The protagonist has a pair of strikes with open palms, a pair of kicks, a standard kick in a jump and an acrobatic "super kick" with two legs, which also takes away a certain amount of vital energy from the titular character himself. Everything, on this arsenal of attacks and strikes is completely exhausted. And you should not even think about the possibility, for example, to take away weapons from the enemy, or attack him with the help of magic or the armed support of friends - for all of you in other games. The very minimum program was immediately observed - however, this applies not only to the friends of the protagonist, but also to his enemies. In most cases, opponents who run out of the screen or jump from above are easily killed with a couple of blows, and even the weapon they hold in their hands does not save them.
As for the plot of this particular story about the famous ninja, then, in general, it is similar not so much to previous games from the 8-bit trilogy, but to literary and film noir detectives. The ones in which the cool main character moves, as if on the steps of a ladder, from one enemy to another, beating or shooting all the gangsters he meets. Unless, instead of simple mafiosi, our ninja has to deal with martial arts masters such as boxers and sumo wrestlers.
‹
›
Home
View web version