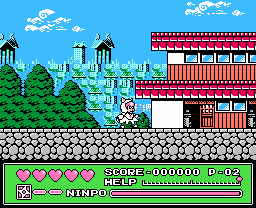 Genre: Action
Perspective: Side view
Visual: 2D scrolling
Gameplay: Platform
Art: Anime / Manga
Setting: Fantasy
Published by: Tecmo
Developed by: Tecmo
Released: 1991
Platform: Nintendo (NES)
The game Ninja Cat is made in cartoon style. It is accompanied by original oriental music, good special effects and purely Japanese graphics. Your task in this fairy tale game is to free one of the towns and restore justice to it.
Long ago, in the head of Professor Yastreb, an insidious thought arose, namely, the idea of power, of power over the whole world, of all who quietly live in it. Start the implementation of this not very original thought, he decided with a simple town, seemingly no different from all other towns. But, unfortunately Hawk, in this city there were very brave cats who decided not to put up with the idea of ​​capturing their home town by some kind of Hawk. Here they are:
A fat cat - possesses an indescribable power, by means of which he breaks through huge stones blocking your path;
A cat in red clothes carries a device behind his back, which allows him to break through tunnels and passages in some places;
A cat in a helmet, with wings behind its back, can fly. This opportunity will save you time and save both life and energy;
The fourth cat, in green clothes, swims like a fish, and not only over the surface, but also under water.
Besides all the bells and whistles, each of the cats has its own weapon and superweapon, which you can use in extreme cases (↑ + Turbo-B), but this weapon is not infinite, and its remainder can be seen on the HELP ticker in the lower right corner. Superweapons can be replenished and updated, collecting on the road squares with a picture inside. It is also useful to embed a pigeon flying past, because sometimes good prizes come out of it.
The game is divided into eleven levels, in which the picture of the action is very diverse. Also various are the bosses with which you have to fight after passing each stage.