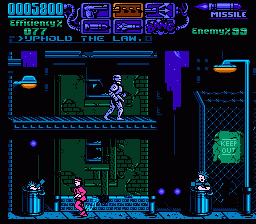 Genre: Action
Perspective: Side view
Visual: 2D scrolling
Gameplay: Arcade, Platform, Shooter
Setting: Sci-Fi / Futuristic
Narrative: Crime
Published by: Ocean of America
Developed by: Probe Software Ltd.
Released: 1992
Platforms: Nintendo (NES), SEGA Master System, SEGA Genesis / Mega Drive, Super Nintendo (SNES)
Here, as in the movie, RoboCop will have to fight against crime. It offers 6 types of weapons, ranging from pistols and ending with missiles with a powerful blast. The game is repeated brief moments of the film. Here you will find yourself in the dark of night the streets of Detroit, will visit the abandoned factory, a takeoff on jetpacks survive the shelling from a tank battle with armed punks and alien cyborg ninja. All this looks amazing, both in terms of beautiful, cartoon graphics and well-chosen voice. Music in general so peerless. The gameplay is fun. Robocop heavy, and should not allow more rapid enemies thrust into a bullet character. At levels across secret rooms with prizes. Some lechilki can only be used during the repair of RoboCop, spend it prudently. High-quality game of the film in all respects.
‹
›
Home
View web version