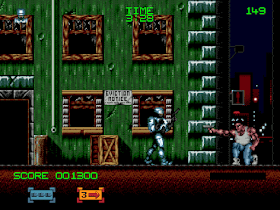 Genre: Action
Perspective: Side view, Top-down
Visual: 2D scrolling
Gameplay: Arcade, Platform, Shooter
Setting: Sci-fi / futuristic
Narrative: Crime
Published by: Flying Edge
Developed by: Ocean Software Ltd.
Released: 1993
Platforms: SEGA Genesis / Mega Drive, SEGA Master System, Nintendo (NES), Super Nintendo (SNES)
A classic game based on a series of famous films about RoboCop. Once upon a time, Alex Murphy was an ordinary policeman, honestly carrying out his service. Performing the next task, he is caught by bandits and mercilessly shot. Alex didn't die that day. A corporation engaged in the development of cybernetic organisms gives him a second life, making RoboCop out of him - a robot with a human brain. Now the hero will have to go out into the streets of Detroit for a long time to clear them of crime. In the game you have to shoot a lot, so in the course of action your arsenal will be constantly replenished with new weapons.
‹
›
Home
View web version