Captain America and the Avengers (NES) 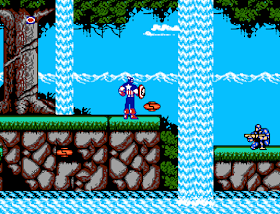 Genre: Action
Perspective: Side view
Visual: 2D scrolling
Gameplay: Arcade, Shooter
Published by: Data East USA
Developed by: Data East Corporation
Released: 1991
Platforms: Nintendo (NES), SEGA Genesis / Mega Drive, Arcade Machine, Super Nintendo (SNES)
Platformer about the adventures of the superhero team the Avengers from Marvel comics. It features two characters: Captain America and Hawkeye. The villain Mandarin lured into captivity Iron Man and the android Vision, and we will have to release them. Both superhero move around the cities of America, their path is visible on the map. Cap uses his powerful enemies throwing shield, Falcon also reeks invaders slightly less powerful arrows. Each character advantages: the captain's special moves, the archer pulls enemies with his arrows where Cap does not make it. At first, the characters are not very powerful, but they can be pumped, collecting along the way crystals of power. Despite a certain monotony in terms of graphics, level design, music and enemies, the game excites the interest of and did not get bored.

Can shoot from the bow in various directions and jump very high.
A - a shot from an onion;
B - jump.

Captain America begins his adventure in Miami, the Hawk falls into New Orleans. Switch captain and Hawk by pressing ⇐ and ⇒.
The most complex cities are Charleston, New York, Salt Lake City and Eivenger Park. In the park you will meet with the leader of the gang Mandarin.

Traps (Red Alert) are marked on the map with a rotating asterisk with many rays. They come in three forms:
Soldiers emerging from emptiness and jumping from above
Throw a shield and shoot from the bow.
Soldiers and a robot flying and firing rockets
Kill the soldier and in the jump, beat the robot with your foot.
Robot with barrels and a robot shooting fire
Three times, break the barrels over the head of the robot. When the robot explodes, its wreckage will begin to run and shoot. Further reprisals of labor will not be. The robot with fire will die after several hits into it. Keep in mind that a burning robot is dangerous - it will explode.
If the twisting stars interfere with your progress, then move to their free place, and then return with the "Return" item in the "Pause" mode. The asterisks will be in new places.

Vousp does not fight, but he helps you with valuable advice, reports on which city was attacked.
Do not miss boxes. In the boxes lie crystals and hearts. Small hearts restore your energy by two points. Large - completely. For a hundred collected crystals, the hero gets life and strength. If Captain America recruits two hundred crystals, the shield will fly around him at the throw, while the Hawk with two hundred crystals at the end of the arrows will have dynamites.

In a room in Charleston, pay attention to the three light switches - signs with the inscription "ON". The enemy will try to turn off the lights and leave you in the dark. As soon as the enemy jumps from above, throw the shield and sit down. The enemy will shoot two cartridges and an energy charge, then take off. Immediately after this, get up and go to meet him, without stopping. If the charge touches the ground, it means that the enemy lands - turn back and repeat your actions from the beginning.

Do not fall into it - you will not like it.

A safe place in New York

In the room of New York immediately jump is not the highest platform. Wiltron (Viltron), your opponent, will trample down the houses from one jump to the ground, but he is powerless against the chosen platform.
In the fight against Wiltron, it is better to use the Hawk.
Stand on the platform on the left. When the enemy will fly over you, shoot, but do not go a step.

Fight against the Crossbones

In a room with an enemy, you need not only to shoot, but also to watch, as if you do not fall on the head of a large ball. Karatist is not dangerous when running slowly, but in the presence of super-speed - beware!