Captain America and the Avengers (SEGA) 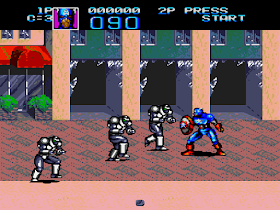 Genre: Action
Perspective: Side view
Visual: 2D scrolling
Gameplay: Beat 'em up, Shooter
Published by: Data East USA
Developed by: Data East Corporation
Released: 1992
Platforms: SEGA Genesis / Mega Drive, Arcade Machine, Nintendo (NES), Super Nintendo (SNES)
If once again we take as a basis a similar creation on the SNES, then it is easy to determine the similarity of toys, primarily in graphic design and action. You are given a choice of 4 characters from comics, well, then everything is known - your hero moves forward, eliminating crowds of enemies and bosses. The game has no grandiose advantages, it is a regular combat walker for 1-2 players.
‹
›
Home
View web version