Captain America and the Avengers (Arcade) 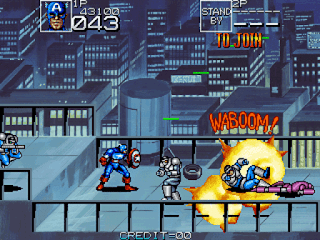 Genre: Action
Perspective: Side view
Visual: 2D scrolling
Gameplay: Beat 'em up / brawler, Shooter
Published by: Data East USA
Developed by: Data East Corporation
Released: 1991
Platforms: Arcade Machine, SEGA Genesis / Mega Drive, Nintendo (NES), Super Nintendo (SNES)
There are four superheroes available to the player: Captain America, Iron Man, Hawkeye and Vision. The battles in the game are fought in locations such as New York, the underwater world of Atlantis, as well as at the Red Skull's lunar base with a huge laser installation aimed at destroying the Earth.

The gameplay is similar in form to the Teenage Mutant Ninja Turtles series developed by Konami. Each character can attack, jump, and pick up and throw certain items such as bricks or barrels. In addition, each hero has his own special attack and the ability to block certain types of attacks. Most opponents that meet on the way, as a rule, die from just a few hits. At the end of each level (in some cases - in the middle) there is a meeting with bosses, who offer more serious resistance. Among the bosses in the game there are such characters as Chloe, Living Laser, Whirlwind, Sorcerer Supreme, Grim Reaper, Juggernaut, Mandarin, Ultron, Crossbones and Red Skull. The rest of the Avengers, such as Wasp, Quicksilver, Wonder Man, and Namor, perform only cameo roles.
‹
›
Home
View web version