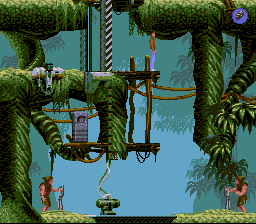 Genre: Action
Perspective: Side view
Gameplay: Platform, Puzzle elements, Shooter
Setting: Cyberpunk / Dark Sci-Fi
Published by: U.S. Gold Ltd.
Developed by: Delphine Software International
Released: 1993
Platforms: Super Nintendo (SNES), 3DO Interactive Multiplayer, SEGA Genesis / Mega Drive, DOS, Atari Jaguar
The game begins with a beautiful cutscene in the spirit of Star Wars. Escape, chase and fall on an unknown planet, as a result, completely lack of any hint of memory from the main character. Sclerosis will torment you throughout the game, it is in this element that the authors have invested the main intrigue, hung the screen behind which an uncomplicated plotter hides. Later it turns out that the memory of Conrad (the main character of Flashback) was specially erased and placed on a magnetic medium in order to avoid leakage of information during the hero's capture in captivity to the enemy.

The developers were clearly inspired by the films with the participation of Arnold Schwarzenegger. The details confirming this, stick out from the bins of the game, as two legs stick out of the sheaf in the summer :). At first you will learn "Total Recall". Enemies further along the way with their abilities - poured T-1000 from Terminator 2. And the TV show, in which Conrad will take part to win a ticket to Earth - a hint of the film "Running Man". Apparently, such an incentive for the shakers of brilliant games is to take ideas from cult films and fill them with their own fantasies.

The developers took advantage of a successful formula, which was so appealing to players in Another World. With all their might they tried to make the world of the game not like ours. Here you have the surreal landscapes of the planet Titan, and the city of New Washington with the metro stations that carry the "strange" names "Africa", "Asia", "Europe" and "America", and our mother Earth, absorbed in the abyss of technogenic engineering, and even the planet Morfius, awakening nostalgia for the film "Alien." The atmosphere of the game is exactly this.

The size of the locations compared to Another World is simply gigantic. Throughout the seven levels, we have to knock down a lot of enemies, solve a lot of cunning puzzles, and enjoy the game itself. The graphics of the game are beautiful, the animation is also excellent. Of course, without a spoon fly in a barrel of honey did not manage and this time. The SNES version suffered a sound and control. The sound is not bad, but rather strange, but the music only sounds in inter-rollers, and, only occasionally, it rings with a melancholy note during the game process itself. You can get used to control, but very important tricks will have to be mastered by yourself, making out those still forts on the keyboard or joystick. Complexity ... The complexity of the game is traditionally high, but playing in Another World this factor does not scare away. As already mentioned above, the levels are simply huge, so the authors, in order to avoid the anger of gamers, implemented the game save-terminals, which can be saved during the passage of the level. Sometimes to such a terminal you have to stomp like a lot, but it's worth it. The gameplay itself is a mess in the best traditions of Prince of Persia, Blackthorne and, more than once mentioned by me, Another World. There are no significant innovations, except for the inventory screen, numerous conversations with Npc and sub-plotting of the plot.

A bit about cutscenes

As for the console version of this wonderful multi-platform game, there is a decent number of cross-level and simply script animated clips. They are made using the same technology as Another World. Watch them very nice, good drawing and directing performed perfectly.