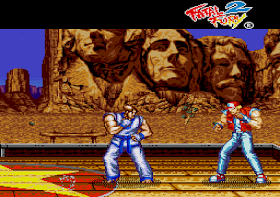 Genre: Action
Perspective: Side view
Visual: 2D scrolling
Gameplay: Arcade, Fighting, Martial Arts
Art: Anime / Manga
Published by: TAKARA U.S.A. CORP.
Developed by: SNK Corporation
Released: 1994
Platforms: SEGA Genesis / Mega Drive, Neo-Geo, Super Nintendo (SNES)
Continued fighting game. The choice of characters has expanded, and now there are 8 single player and 12 - In separate fighting for survival and match (choose 5 fighters who alternately fighting with 5 fighters of the enemy, when a fighter ends energy in its place stands the other). The graphics and sound are improved, so that the progress of the game is obvious. Difficulty levels remain 3 as the speed of the match. The game is for 1-2 players. It recommended to fans of fighting games.

After your game is over and the Continue Screen is counting down, you can increase your continues up to nin by pressing UP, A, and B simultaneously. At the same time, press button C for every extra continue you want.

Highlight the "Point" option in the "Control" section of the options menu for either player. Press and hold B and left until it reads 0. That player will now have to win 99,999 times to win (effectively making it impossible for them to win). This code works for either player, but only in versus mode. "1P" and "Survival" modes are unaffected.
‹
›
Home
View web version