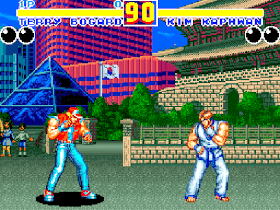 Genre: Action
Perspective: Side view
Visual: 2D scrolling
Art: Anime / Manga
Gameplay: Fighting
Narrative: Martial arts
Published by: TAKARA U.S.A. CORP.
Developed by: SNK Corporation
Released: 1994
Platforms: Super Nintendo (SNES), SEGA Genesis / Mega Drive, Neo-Geo
Takara has made a wonderful gift for all fighting game fans! She transferred from Neo-Geo to her favorite 16 bits the wonderful series Fatal Fury. A series of these games has long won the hearts of millions of fighting game fans around the world. She is one of the early clones of Street Fighter 2. Although the game does not have such a rich selection of characters (and the number of games themselves) as in the famous Capcom series, it has great graphics, decent music and brilliant sound special effects. An attempt was made to make three measurements: fighters can approach the screen or move away from it. And most importantly, the indescribable atmosphere of the series!
‹
›
Home
View web version