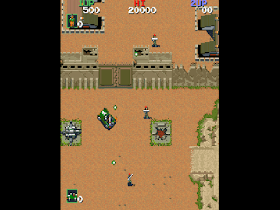 Genre: Action, Racing / Driving
Perspective: Diagonal-down
Visual: 2D scrolling
Gameplay: Arcade, Shooter
Vehicular: Tank
Published by: Konami Industry Co.
Developed by: Konami Industry Co.
Released: 1986
Platforms: Arcade Machine, Nintendo (NES)
A classic hit from Konami. The same "Jackal" that many played as children on an 8-bit Nintendo are now the original version. Before you is an exciting action movie in which you control a combat jeep equipped with a machine gun and a bomber. Your task: to save prisoners of war and clear the territory from enemy equipment. The fight will be uncompromising and rather tense. You will be opposed by soldiers, tanks, guns and rocket launchers, warships and submarines, as well as aircraft that will bomb from the air. It is necessary to blow up the barracks, pick up the prisoners and deliver them to the rescue helicopter. Due to some saved ones, your bomb launcher turns into a rocket launcher, and with a further upgrade, the rockets have a blast wave, which is sometimes simply necessary. The game is good, but quite difficult, especially in the second half, and if you lose lives, you have to start over.
‹
›
Home
View web version