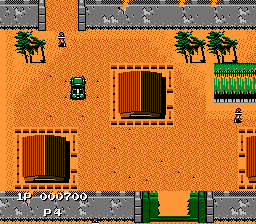 Genre: Action, Racing / Driving
Perspective: Top-down
Gameplay: Arcade, Shooter
Vehicular: Tank
Published by: Konami
Developed by: Konami Industry Co.
Released: 1988
Platform: Nintendo (NES)
Interesting shooter military jeep, a co-op mode for two players to Nintendo. The player will take control of a military jeep equipped with a machine gun, which can fire only in a northerly direction grenades or a rocket launcher. The goal of each level is to pass the level and the battle with the boss. A secondary objective will be rescuing hostages and taking them to the point of evacuation, for which will be given better weapons. Such improvements do not change dramatically weapons installation, but only gives certain bonuses to flight range missiles or shockwave.

In the third level, in the place where the electric rays pass, the prize star is hidden. To take it, turn to the right, blow up two tanks, go a little ahead of the houses. There you will see a jeep. It must be blown up, and under it there will be a star.
After the victory over the boss you are shown a cartoon where the crew of the car looks at the map of the area. However, there is another version of the cartoon: the machine and the machine-gunner, furiously shooting and yelling some phrase. To see him, you need to defeat the boss, without losing a single life and shooting a machine gun.
Note that if you do not release any blinking prisoner, then the previous secret will not work. For particularly meticulous: if you release one captive, then the machine gunner will shout WE MADE IT !, if two or three - then YE-A-A-H-H!
‹
›
Home
View web version