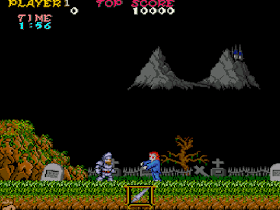 Genre: Action
Perspective: Side view
Visual: 2D scrolling
Gameplay: Arcade, Platform, Shooter
Setting: Fantasy
Published by: Nintendo of America Inc.
Developed by: Capcom Co.
Released: 1988
Platforms: Arcade Machine, Nintendo (NES)
Night, a cemetery and you, a fearless knight in armor, making your way through crowds of various evil spirits, set off to save your beloved princess Prin Prin, who was kidnapped by a huge flying monster (similar to Satan) just before your eyes. You will have to fight zombies that crawl out of the ground just under your feet, monster plants that spit eyeballs, forest ghosts, predator crows, flying gargoyles and other representatives of hellish living creatures. After the cemetery, your path will go to other gloomy locations: a forest, a ghost village, a cave. Creepy and quite dangerous, but the hero is ready to risk his life for the sake of his beloved. You die from two blows: after the first, you lose your armor and remain in your shorts, after the second, only bones remain from you. If you lose armor, you can find new ones if you're lucky. Of the weapons you have throwing spears, but you can find something else: daggers, axes, a torch. Each with its own rate of fire, flight path and other differences. A game with considerable difficulty, but at the same time it is quite interesting and exciting with a creepy atmosphere.
‹
›
Home
View web version