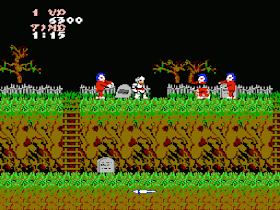 Genre: Action
Perspective: Side view
Visual: 2D scrolling
Gameplay: Arcade, Platform, Shooter
Setting: Fantasy
Published by: Capcom U.S.A.
Developed by: Capcom Co.
Released: 1986
Platforms: Nintendo (NES), Arcade Machine
Arthur, a brave knight, must rescue a beloved princess who has been kidnapped by the Demon King Astaroth. In a long adventure on the path of the hero, in addition to moving platforms, stairs, dangerous bodies of water and fires, there will be a great many enemies, including ghosts, zombies, bats, ogres, goblins and other evil spirits.
The game consists of six levels, and you have exactly 3 minutes to complete each of them (otherwise, one life is lost). The main character faces adventures with a gradual increase in the level of difficulty in the forest, in the village, in the mountains and even in caves. As in most other platformers, we will need to help Arthur collect various bonuses (for example, daggers or bombs, which will give additional firepower), and at the end of each level there is a boss fight. The hero starts the game with armor and a spear. In total, there are five types of weapons: in addition to the spear, Arthur can arm himself with a dagger, an ax, a cross, and even throw a flame. It is noteworthy that after a well-aimed enemy hit us, the character flies off all the ammunition, and he continues his further journey only in red underwear. The second hit is already fatal. By the way, precisely because of the limited number of lives and death from only two hits of opponents, the game is considered one of the most difficult for the console. Some "bonuses", which can turn the hero into a frog or start to rewind time at double speed, do not add lightness either. By the way, for a successful end of the game, you need to go through it twice: the first passage, as conceived by the developers, is only an illusion set up by Satan, but the second is already a real part of the game.
According to many critics of the past (and modern experts too), the port of the game for the NES is one of the most unfortunate. The original game and many of its versions on other platforms are much more fun to play through. Therefore, if we evaluate the game in isolation from other versions, then we can say that it is very good. But if you look at the series globally, you can see many flaws.
‹
›
Home
View web version