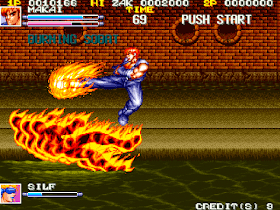 Genre: Action
Perspective: Side view
Visual: 2D scrolling
Art: Anime / Manga
Gameplay: Beat 'em up / brawler
Setting: Sci-fi / futuristic
Published by: Banpresto Co.
Developed by: Winky Soft Co.
Released: 1994
Platforms: Arcade Machine, Super Nintendo (SNES)
The first part of the legendary Guardians. This time, there are only 6 characters: a charismatic and powerful team leader, a purple-haired policewoman (who prefers to kick enemies), a monster, a cheerful jock, a charming monkey girl with a mace and a robot. I must say, each character has its own ending, so be careful who delivers the final blow to the final boss. For special attacks have a separate scale, under the health bar. Unfortunately, sometimes there is a critical bug that interferes with the passage, namely, when one of the enemies goes to the inaccessible left side of the screen and gets stuck there in butting with the wall. Try to keep the enemies on the right if there is an inaccessible section of the screen on the left. The rest of the game is very good. There is a truncated SNES port called Ghost Chaser Densei.
‹
›
Home
View web version