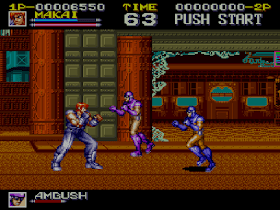 Genre: Action
Perspective: Side view
Visual: 2D scrolling
Art: Anime / Manga
Gameplay: Beat 'em up / brawler
Setting: Sci-fi / futuristic
Published by: Banpresto Co.
Developed by: Winky Soft Co.
Released: 1994
Platforms: Super Nintendo (SNES), Arcade Machine
Ghost Chaser Densei - Beat-Em-Up of a very high level, quite worthy of the limits of the Final Fight and Streets of Rage series, and maybe even surpassing them in some ways. The characters here have just a great variety of blows: all sorts of throws, including in the air, and throwing legs around the neck with the subsequent folding of the enemy, and throwing a dozen fireballs at a time, etc. The quality of the blows depends on the character’s aggression line. Super strikes in the game, which are also diverse, depend on this line. A similar line was also implemented in Final Fight 3, but here it is not made up for by the long destruction of enemies, but only by a small respite of the protagonist. There are only three in the game. If you look a little at the demo game of the computer, you can find out what supers you can create, and also see that with the help of supers you can interact with the second player, thanks to which your union turns into just a powerful energy release. Such an explosive cocktail with the second player has not been offered by more than one Beat 'em up. Banpresto has done a miracle. It is a pity that this company specialized only in the Japanese audience and the game was not outside the country of the Rising Sun, maybe there would be a continuation, a very good undertaking.
‹
›
Home
View web version