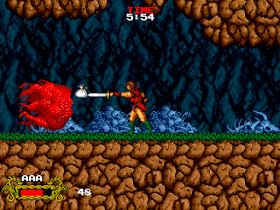 Genre: Action
Perspective: Side view
Visual: 2D scrolling
Art: Anime / Manga
Gameplay: Platform, RPG elements
Setting: Fantasy
Published by: Taito Corporation
Developed by: Taito Corporation
Released: 1989
Platforms: Arcade Machine, SEGA Genesis / Mega Drive, TurboGrafx / PC Engine
This game is a mixture of platformer and RPG. The story tells about the difficult fate of the kingdom. Princess Salasa has been kidnapped and only you can save her from the clutches of a ferocious demon. There are four playable characters - fighter, priestess, mage, or ninja. For each hero there is a special battle tactic. In the game, you will meet old familiar creatures from the fantasy world, such as the Kraken, dragons and evil spirits. The storyline is very well developed here, despite the banal beginning. Graphics and soundtrack are average. There are also many different locations in the game. The result is a rather atmospheric game that combines two genres. Or maybe this is a classic of the already existing Action subgenre - RPG?
‹
›
Home
View web version