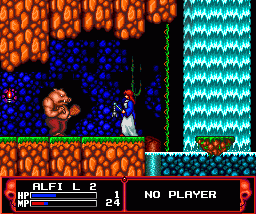 Genre: Action, Role-Playing (RPG)
Art: Anime / Manga
Gameplay: Platform
Setting: Fantasy
Published by: Working Designs
Developed by: Taito Corporation
Released: 1991
Platforms: TurboGrafx / PC Engine, SEGA Genesis / Mega Drive, Arcade Machine
Colorful role-playing game in which to save the kingdom and the princess. For this you need to go to each of the 5 continents. The choice will be 4 kinds of characters: warrior, magician, priest and ninja. You can buy weapons, armor, potions, etc. Remember to pump the hero levels. For the first stage, 6-9 levels are enough, and on the fifth stage you must have at least the 20th level. To use magic, you must hold down the attack button, and when the icon of the desired magic appears, release the button. A nun in difficult positions will help the magic of "Shield" (available from level 6). The wizard will seriously increase towards the end, when he has regeneration of mana.
‹
›
Home
View web version