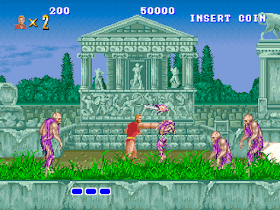 Genre: Action
Perspective: Side view
Visual: 2D scrolling
Gameplay: Beat 'em up / brawler, Platform
Published by: SEGA Enterprises Ltd.
Developed by: Team Shinobi
Released: 1988
Platforms: Arcade Machine, SEGA Genesis / Mega Drive
The game takes place in ancient Greece. Hades, the god of the underworld, kidnapped Zeus' daughter Athena and turned her into a bird. Zeus, in order not to violate the basic law of the gods, which forbids the gods to fight and fight among themselves, resurrects a warrior, whom he instructs to save his daughter.

The highlight of the gameplay is the gradual increase in strength and changing the abilities of the game character as the game progresses. Changes occur when receiving a bonus that appears after a special type of enemy has been defeated - a red (in the console versions - gray) dog Cerberus. Upon receiving three such bonuses, the main character becomes an anthropomorph.
There are 5 levels in the arcade version of the game. At each level, the main character turns into different anthropomorphs:

(difference from the wolf in 1st level - a shock wave and a blue fireball)
The game is not limited to the appearance of only the main character as a werewolf: in the game you can meet a person with a unicorn head. The final boss (an armored rhinoceros) is also an anthropomorph.
‹
›
Home
View web version