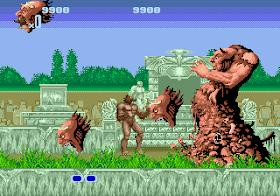 Genre: Action
Perspective: Side view
Visual: 2D scrolling
Gameplay: Beat 'em up / Brawler, Platform
Published by: SEGA of America
Developed by: Team Shinobi
Released: 1989
Platforms: SEGA Genesis / Mega Drive, Arcade Machine
Altered Beast - this is the first in the history of the game to the famous 16-bit SEGA console. It is this cartridge for a while in 1989 went with her to complete at the start of the promotion of the console. Later, she, however, was replaced by the "Sonic the Hedgehog", which contributed to the soaring popularity of the system. In fact - this is the first Sega cartridge, which were provided cheats for adventures.
The semantic content is reduced to the story of how Zeus chose you for a very important task - to save his daughter and the entire country by a demon named Neff. At the villain in the submission are clouds of demons and werewolves, which will be constantly to put a spoke in the wheel. But this is not such a problem, the hero is able to cope with them as a gvoril bare hands and feet.
By controlling your character, you will use one button to deliver crushing blows, the second - for a shot, and the third - for the attack, when you turn into a beast.
The gameplay is quite complicated because of the large number of enemies, but also because of the small number of lives that you can pick up during the game. The levels are not very long. The excitement here at a very high level: every time you try to go farther and farther.
Despite some apparent simplicity appearance of the game, and it is worth to take into account that it was the very first in the category of 16-bit, the impression it produces the best. Many of the products that were released much later, have a much more mediocre and primitive graphics.
These codes and tips will help you to quickly deal with the progress on the difficult levels:

Select any monster in the game. At the title screen, hold Down + at the same Left button, press A + B + C + Start.
Endless continue. Press start during title + A.
Selecting level. Press start during title + B.
Sound Test. On the title screen, hold both up + Right + A + C, press Start.
Continue play after death. Once a character is killed, then hold A button and press the start, until the hero does not come to life several times.
Secret menu options. On the title screen, hold down the B button, press start.
Select stage. The secret menu options, select the desired step. Now simultaneously press A + start, to exit the menu. On the title screen, press again A + start.
In order to jump higher, press Up + C.
Win Nelf. When Nelf turns into a huge eye, go to the center of the eye at the time, while he was still in the smoke and sound an electric discharge.
The final boss. Shoot fireballs. Attacking the enemy often uses his hands than his feet. Use jumps to avoid the kicks.
‹
›
Home
View web version