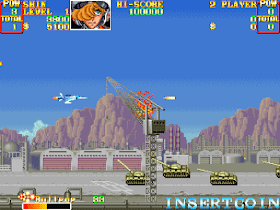 Genre: Action
Perspective: Side view
Visual: 2D scrolling
Art: Anime / Manga
Gameplay: Arcade, Shooter
Vehicular: Flight / aviation
Setting: Sci-fi / futuristic
Published by: Capcom Co.
Developed by: Capcom Co.
Released: 1989
Platforms: Arcade Machine, Super Nintendo (SNES)
A flying game where you are invited to sit at the helm of 1 of 3 aircraft: tigershark, tomcat, thunderbolt. Before the start of each mission, you can replenish your arsenal, which contributes to the passage of each mission. As you progress through the level, you earn greens needed for various needs regarding the arsenal, but in addition, there is the possibility of upgrading machine guns right on the stage and it's completely free. In the game, you have to maneuver a lot from shells of various military equipment, here you will find tanks, and anti-aircraft guns, and turntables more than enough, and that's not all, so you won't be bored.
‹
›
Home
View web version