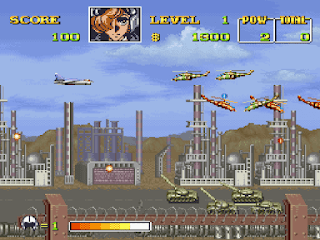 Genre: Action
Perspective: Side view
Visual: 2D scrolling
Art: Anime / manga
Gameplay: Arcade, Shooter
Vehicular: Flight / aviation
Setting: Sci-fi / futuristic
Published by: Capcom U.S.A.
Developed by: Capcom Co.
Released: 1991
Platform: Super Nintendo (SNES)
The game is based on the popular anime and manga in Japan. Everything in Kazama's life was just perfect - a good job, great career prospects and, of course, love. And he lost all this thanks to the betrayal of a man whom he considered his friend all his life. Now Shin, instead of piloting civilian aircraft, had to fly a fighter and participate in death duels with pilots like him over the hot sands of Asran. However, being sent into the heat of war against his will, Shin did not give up hope to regain his former life and freedom... Before you is one of the best flying-shooters on this system. What can we say, when the game was made by Capcom itself! It was originally released on arcade machines, and then ported to Snes with great dignity. In the game, you can purchase various aircraft and weapons for the money you get for downed enemies. Each aircraft has its own configuration. Some of them, for example, are effective against air enemies, while others are against ground ones. A variety of landscapes are presented through which you will militantly fly. The bosses are made on a gigantic scale, and are extremely powerful. They are presented in the form of any other paramilitary equipment, such as a submarine, tank, aircraft, etc. As a mercenary, you work for the Area 88 organization, which is at war with a neighboring state. As you complete missions, the number of territories after your successful sorties will expand, providing access to new goals. But not everything will be so simple. You need to have increased reflexes in order to simply survive, as well as effectively fight against all enemy forces, quickly and on time to maneuver and dodge all kinds of enemy bullets. So the game will not be easy to pass. However, if you are looking for a challenge from the old school of video games, then this game is for you. A worthy representative of the genre.
‹
›
Home
View web version