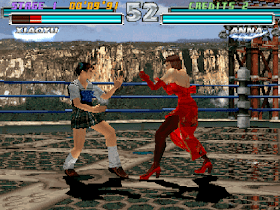 The gameplay of the game is identical to Tekken 3. Players in Tekken Tag Tournament can fight in a group of two characters. At any time in a match, the player can press a button on the gamepad to switch to another character, allowing the hero to regain hit points. The group can make tag combos or special rolls. In some cases, the character's lifebar may flash - this means that the character has a lot of power for a certain time. The player loses the battle if one of his fighters has lost all his hit points. In the event of a timeout, the team with the most health wins.
The game features more than 35 characters that have previously appeared in Tekken 2 and Tekken 3. In addition, there is a new boss Unknown, similar to Mokujin, as she can imitate the fighting style of any character, as well as change the fighting style to others by pressing the analog stick.

As such, arenas in Tekken Tag Tournament do not have names, they are named after characters. Most arenas in the game have two options: A and B, they differ slightly from each other. All arenas (except "Unknown") are remakes of arenas from Tekken 3.

Tekken Tag Tournament is not part of the main Tekken storyline. This allowed the developers to bring back characters from past entries in the series (such as Baek Doo San, Bruce Irvin, Jun Kazama, Kunimitsu, and Michelle Chang). The age of the characters in this game corresponds to the age they had in the last game in which they appeared. But there are also characters that didn't return from the previous games: First King, Marshall Law, First Jack, First Kuma, Gon, and Doctor Bosconovitch (appears as a spectator in the Tekken Bowll mini-game).
Two new characters appeared - Tetsujin and Unknown. Tetsujin is a silver colored version of Mokujin. Unknown is the main boss of the game. Both of these new characters mimic the fighting styles of other characters.
‹
›
Home
View web version