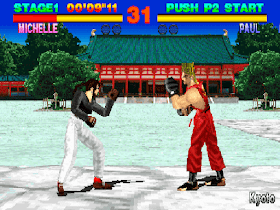 Genre: Action
Perspective: Side view
Visual: 2D scrolling
Art: Anime / Manga
Gameplay: Fighting
Narrative: Martial arts
Published by: Namco Limited
Developed by: Namco Limited
Released: 1994
Platforms: Arcade Machine, PlayStation (PSX, PS1), Game Boy Advance (GBA)
The first Tekken appeared in Japanese arcades back in 1994. Being just a good clone of the brilliant Virtua Fighter (1993), he did not gain much popularity. While Tekken was visibly superior to Sego's fighting game in terms of graphics, there was still a lot to be changed in terms of gameplay. The turning point was 1995, when the game was released on the latest console of the time - the Sony PlayStation. The tandem of a powerful gaming console and a promising fighting game turned out to be very successful, becoming an excellent foundation for a long and fruitful cooperation: gamers began to catch up with game stores, who were only interested in one question, “Do you have Tekken?”
‹
›
Home
View web version