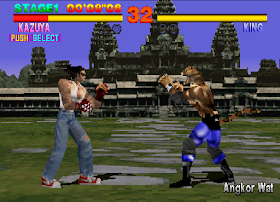 Tekken offers fights between two characters, each with a health bar, a colored bar at the top of the screen, which decreases when a player is damaged. Once the gauge is completely emptied, the player is knocked out and loses the round. The game is very simple, and can easily be understood by beginners. The game system is based on four buttons, each corresponding to a member of the character3: X = left kick (LK), O = right kick (RK), Δ = right punch (RP), and □ = left punch (LP).

Heihachi Mishima was a master of Japanese finance. He was the head of the Mishima Zaibatsu and was one of the richest and most powerful men in Japan. To top it off, his wife Kazumi, a beautiful young lady from Japan, was expecting a child from him. Unfortunately, on the day of the birth, his wife died and left him a pretty boy named Kazuya. Heihachi, in pain and sadness, blamed Kazuya for the death of his wife. The years passed and Heihachi still maintained his hatred towards Kazuya, which he dragged hard to the art of karate style Mishima, the hereditary style of combat. Delivered to himself, little Kazuya still managed to find something nice in his father, despite the coldness and wickedness that surrounded him.
One day, Heihachi dragged Kazuya, now 10 years old, far from his father's house, close to a ravine. Heihachi began to be very aggressive and beat his child, sending him further and further to the deep ravine. Then, little Kazuya, wounded and lying on the ground, felt a muscled hand grip his collar. Seconds later, before Kazuya became aware of the terrible act that his evil father was committing, he was thrown into the ravine. Kazuya, half fainting because of the many blows his father had sent him, reached for the sky, hoping to catch a hand that would save him. Then Kazuya shredded the body, cutting on the rocks, then crashing into the depths of the abyss. A deep wound in Kazuya's chest hurt horribly. It was only a matter of time before Kazuya gave up the ghost, as his body was bleeding out at a blazing speed. In a last wave of hate, he swore revenge on his father. He was going to give up the ghost when a demon came out of the bowels of the ground. The demon proposed to the young boy to take place in him, in exchange for life and a possible revenge on his father. Kazuya did not take the time to think because death was approaching and he accepted the pact. Kazuya survived, while keeping his demonic entity that would surely help him, in the near future, to defeat his father.
The years that followed were very sad and silent, and Heihachi was suspicious of his son, who had miraculously survived his attack. One day, during one of his trips, Heihachi met a young boy, the same age as Kazuya, fighting in the street. Impressed by this young boy named Lee Chaolan, Heihachi decided to adopt him and brought Lee home. The years passed and Heihachi became more and more brutal towards Kazuya. Kazuya envied Lee a great deal. He had everything he wanted, Heihachi's affection that Kazuya had never had, and Heihachi also trained him in Mishima style karate. Kazuya remained alone, and found energy and passion only to train hard at the art of karate style Mishima. Soon, Kazuya left the family home to live his own life, as far as possible from his father, the being he hated more than anything in the world. What does it matter, Heihachi would prepare well for his son to come and make him skin or maybe it would be him who came to Kazuya. Heihachi organized an international martial art tournament with several masters of the fight: the King of Iron Fist tournament. Some were interested in the bonus, the largest amount of money ever offered in a professional competition, others, like Kazuya, were interested in revenge.
With the help of the Demon, Kazuya wins the King of Iron Fist tournament and defeats his father Heihachi in the final. Taking revenge on him, he throws his father off a cliff without remorse and takes control of the Mishima Zaibatsu, a society hitherto run by Heihachi.

The original arcade version features eight playable characters4. Each character has his own boss, a special character to beat in Stage 8. Heihachi, the main antagonist is the final boss of the game. The bosses and Heihachi can not be unlocked or played in the arcade version. On the other hand, to the adaptation of the game on PlayStation, they are playable. Characters include: Kazuya Mishima / Devil, King, Paul Phoenix, Marshall Law, Michelle Chang, Nina Williams, Jack, Yoshimitsu, Heihachi Mishima, Lee Chaolan, King Armor, Kuma, Ganryu, Kunimitsu, Anna Williams, Prototype Jack, and Wang Jinrei.
‹
›
Home
View web version