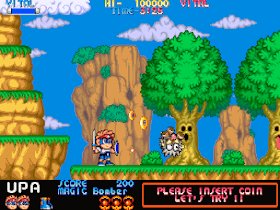 Genre: Action
Perspective: Side view
Visual: 2D scrolling
Gameplay: Platform, RPG elements
Setting: Fantasy
Published by: Capcom Co.
Developed by: Capcom Co.
Released: 1990
Platforms: Arcade Machine, SEGA Genesis / Mega Drive
A game about two miraculously escaped twins who take revenge on the offenders who encroached on their kingdom. The way they will not be easy from sky-high heights to the dark depths of the underwater kingdom. The variety of the game does not hold, here you will swim with plenty of scuba diving, ride the clouds and jump, like in the good old platformer. The game is painted in bright colors with the addition of all kinds of special effects, which cannot but please. The musical accompaniment is melodic and not boring. You have to fight with the bosses as many as 2 times per level, but don't be scared, because. the first one is basically not particularly difficult, it’s like the first one, but the second one will have to sweat. In general, the game is quite entertaining.
‹
›
Home
View web version