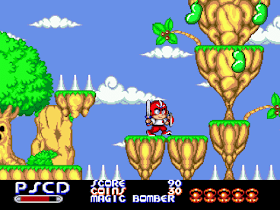 Genre: Action
Perspective: Side view
Visual: 2D scrolling
Gameplay: Platform, RPG elements
Setting: Fantasy
Published by: SEGA of America
Developed by: Capcom Co.
Released: 1993
Platforms: SEGA Genesis / Mega Drive, Arcade Machine
This colorful and fun platform game was first released on Capcom's arcade systems in 1990, and has since moved to some game consoles. Which, however, is not surprising for such a project, also known as Mega Twins, it was undoubtedly a success. After all, what is needed for a good game, especially in those noble nineties? For me, so cheerful music, perky gameplay, and cartoonish graphics will really cheer up any game lover. So, what kind of story do the Kapkomites offer us? The land of Aluria is attacked by a destructive monster, and the idyll of their inhabitants turns into a tragedy. Not only the king died, but the legendary artifact, whose name is "Dragon Blue Eyes", was stolen. Everything would have ended very sadly, because for many years of a serene life, the Alurians forgot how to fight, and were helpless before the invasion of evil spirits that settled on Aluria after the coming of the monster. But the king is the king, that he left behind the crown princes. So they then came to the aid of the Alurian sufferers. The twin brothers accept the challenge of the enemy and undertake the search for the sacred stone, which is rumored to be able to return everything to normal. They understand what threatens them, and that the one who is to blame for everything will also meet them on the way. But people need peace, and who but them will bring it back? At first it seems that everything will be simple, run, strike with a sword, strike with magic and you will be happy. But this is all an illusion, as the difficulty of the game will increase, and it will become a reality. At the beginning of the game, one of two characters is offered to choose from, one of them is able to wield a sword better, and the other is more experienced in handling magic (but in a limited amount). But one way or another, the sword is the main weapon in the game, basically only they have to swing left and right. It is quite simple to control the heroes, we run, jump, rotate the blade, use magic, three buttons rule, one of the actions is fixed on each. You can not only jump, but also cling to walls in order to throw yourself into places that seem inaccessible. And there may be gilded chests stuffed with various bonuses, money or, for example, an energy healer. Enemies climbing from all sides, after killing, part with the money quite easily, there are even places where you can just stand on the platform and beat the enemies climbing from behind the screen, collecting coins. Financial resources simply need to be spent, and for this there are special shops that offer all sorts of benefits for one price or another. And this may be the extra lives you need, magic and a more advanced sword. Chests can, by the way, be found not only in hard-to-reach locations, but also simply accidentally dropped out of the air, knocked out when swinging a sword. Having started the game, we will be offered a choice of three locations, earth, heaven, sea, you can start playing in any one you wish. The remaining levels will be available upon completion of these three areas. And in the finale, the battle with the source of all troubles is by itself implied.
‹
›
Home
View web version