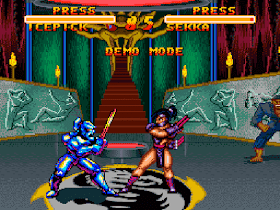 Genre: Action
Perspective: Side view
Visual: 2D scrolling
Gameplay: Fighting
Narrative: Martial arts
Published by: Tradewest
Developed by: Leland Interactive Media
Released: 1994
Platforms: Super Nintendo (SNES), Atari Jaguar, SEGA Genesis / Mega Drive
I don’t know what inspired me to make a fighting game out of the popular Beat-em-up series Double Dragon. Although Neo-Geo had successful experiments in this regard, in the form of Double Dragon and Rage of Dragons games, this experience, perhaps, should be taken only from a negative side. Double Dragon V is an unremarkable fighting game with a standard set of characters. Each of them has his own tricks and combinations. The whole process takes place against the background of a gloomy universe made in the style of cyberpunk. Of course, the game can acquire its few fans, but most will agree with me that the project is not successful. Of course, Double Dragon is one of the most famous beat'em'up series, which showed a low level of quality only on the Sega Genesis. The rest of the games in the series on Nes, Snes, PC Engine, Neo-Geo, GBA must be played without fail.
‹
›
Home
View web version