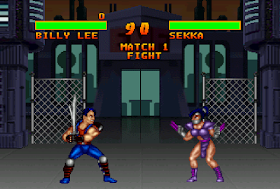 Genre: Action
Perspective: Side view
Visual: 2D scrolling
Gameplay: Fighting
Narrative: Martial arts
Published by: Tradewest
Developed by: Leland Interactive Media
Released: 1995
Platforms: Atari Jaguar, SEGA Genesis / Mega Drive
The game Double Dragon V: The Shadow Falls belongs to the Double Dragon game series, and is made in a new style for this series, if earlier it was Beat-Em-Ups, now it is the most natural fighting game, like Mortal Kombat or Street Fighter. This is the first game in the series that was developed not by Technos, but by Leland Interactive Media - Tradewest's subsidiary for SEGA and SNES, and Telegames for Atari Jaguar. The game is based on the cartoon series Double Dragon. Unlike the Sega MegaDrive and Super Nintendo version of Double Dragon V: The Shadow Falls, the Atari Jaguar version of the game initially features not 10, but 8 characters. Among which there are brothers Dragons. Each of the characters has their own unique moves. The game has four modes. Your task is exactly the same as in most fighting games, choose the character you like and defeat everyone. The game has a semblance of Fatality from Mortal Kombat, only these finishing moves are called here as "Overkill".
‹
›
Home
View web version