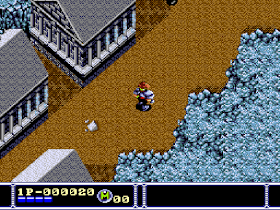 Genre: Action
Perspective: Diagonal-down
Visual: Isometric
Setting: Fantasy
Published by: Sammy Corporation
Developed by: Wolf Team
Released: 1993
Platforms: Super Nintendo (SNES), SEGA Genesis / Mega Drive
The game invites you to digress from the same type of RPGs and adventures in castles. Choose a hero and go on an adventure to find legendary weapons and resist the monstrous evil that haunts the land. In general, a good game with the ability to choose a character drawn in anime style. The action of the game takes place with a view from above, where your one of the four heroes walks through ancient locations and destroys all kinds of monsters. The implementation of everything is at a very good level. Might hold on for a while. You can also play in two player mode.
‹
›
Home
View web version