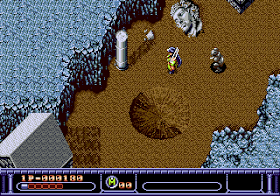 Genre: Action
Perspective: Bird's-eye view
Visual: Isometric
Setting: Fantasy
Published by: Renovation Products
Developed by: Wolf Team
Released: 1991
Platforms: SEGA Genesis / Mega Drive, Super Nintendo (SNES)
The truth here does not awaken the battles in the likeness as in Final Fantasy it's still an action. But here, as well as in the RPG, you can awaken your hero, collecting different items, etc. A pleasant opportunity in this game is the mode of two players. Not in every RPG is this possible. The plot of the game is that hundreds of years ago there lived a magician Castomira, who wanted to destroy the land of Arcus. Her plans were put by Princess Leaty, the granddaughter of King Light. The battle began in which the victory was gained by the forces of light, and the forces of darkness, or rather the sorceress Castomira, was imprisoned in the Dark World. The weapon against her was the sword Leaty, which is now known as "The Power of Leaty". Many millennia later, followers of Castomira stole a sword and want to release their leader from the dark world. To place this can be four warriors Jedda the Swordsman, Diana the Archer; Erin the Warrior-Maiden and Bead the Mage. Now the fate of the kingdom of Arcus and the whole world is in your hands.

In order to enter the password in the game from the main menu, enter the Password item. Here you can immediately enter a password for both players for Player 1 and Player 2. But for this you need to enter the codes of different characters to the same level. In order to enter the code, select the letters and numbers with the up or down arrows. To switch to the next letter, use the "Right" arrow button to return to the previous letter and fix its "Left" button. To enter the code press the "Start" button. If done correctly, you will immediately move to the level.
To enter the code for the second player, you need to put the code on the second joystick.
There are several characters in the game, so passwords are presented for each character, and since the password generated at the same level may differ depending on the characteristics and things of the character.

If you want more items for one player, which will help easier and easier to pass the game, you need to start it on two players, and simply get rid of the second player by killing him.

If you hold down the "C" shooting button, then the front of the character forms a semblance of a protective field.
‹
›
Home
View web version