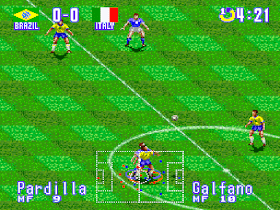 Genre: Sports
Perspective: Diagonal-down
Visual: 2D scrolling
Sport: Football (European) / Soccer
Published by: Konami (America)
Developed by: Major A
Released: 1995
Platforms: Super Nintendo (SNES), SEGA Genesis / Mega Drive
Continuation of the game ISS, better and more interesting. The number of teams has increased, it has become more difficult to play thanks to 5 difficulty levels, and the number of game control settings has also increased. Many tactical options are available, including personal play and pressure; the number of players in the teams has increased (at the expense of substitutes, of course), as well as the number of individual indicators of each player. You can play a friendly match, championship, world series, scenarios, practice. Game for 1-2 players. Subjectively, this soccer sim is the best on the SNES.
‹
›
Home
View web version