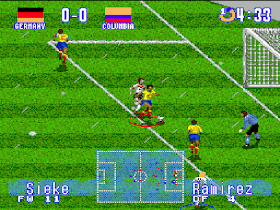 Genre: Sports
Perspective: Diagonal-down
Visual: 2D scrolling
Sport: Football (European) / Soccer
Published by: Konami Deutschland GmbH
Developed by: Factor 5
Released: 1996
Platforms: SEGA Genesis / Mega Drive, Super Nintendo (SNES)
I think to start with banal words, like “every person on Earth has kicked a ball at least once in his life, etc. etc." not entirely appropriate. However, to highlight the fact that the Earth is full of both just fans and "playing" fans of this wonderful game, to put it mildly, is not enough! So there are more than enough fans of football simulators among gamers. How did our beloved and ever-living Megadrive please fans of "sokker" at the time?
Of course, a whole series of FIFA games immediately comes to mind, starting with the very first FIFA International soccer in 1993 with fictitious names of football players, ending with later versions and even so-called hacks like FIFA 2003 with real prototypes of such famous people as Ronaldo, Zidane, Del Piero and others. Of course, many will also remember the ambiguous parts of Sensible soccer, not to mention such unpretentious football variants as the World cup 90, 94, Pele soccer ... But we will not talk about them.
In 1996, the little-known company Factor 5 released the game International super star soccer Deluxe (hereinafter referred to as ISSSD), which undoubtedly became a hit among football simulators on SEGA. The publisher turned out to be Konami itself !!!

Perhaps this simulator is one of the most "live" on SMD. Firstly, the strategic line itself, the choice of players, the line-up here are not just made for decency and beauty. It is more realistic that if the attacker is set to "return to the goal", then he will work out both in attack and in defense, and if the whole group of midfielders in the "team strategy" options indicate an active connection to the attack, then with a successful attack, the chance to complete an attack with a goal increases, at the same time, the chance to miss a counterattack increases! That is, there are undoubtedly many features of real football here. But more on this later.
Management in the game at first glance is not the easiest. Even far from all SEGA games use six-button control, however, all 6 control buttons will be used in ISSSD:
On the attack:
A - accelerations (both in attack and tackle), feints.
B - pass, and with a successful attack "with a cross" along the gate, goals are easily scored with this "pass". If the ball is in the air, then by pressing the same key, the player will gently throw the ball at the nearest teammate.
C - a canopy, both from the game and from the corner.
Z - kick / head kick on the ball, the impact force depends on how long the button is held down, and the trajectory depends on pressing the corresponding control arrow.
In tackle/behind the field:
B - technical tackle (usually used by experienced players)
C - a classic tackle, the most optimal opportunity to take the ball away, but sometimes you can injure and get a yellow card, and if you “roll up” the opponent’s goalkeeper, they will immediately slap a red card !!! ))
X - if the ball left the field, by clicking on the "X" you can enter the team management mode and make a replacement and other permutations.
Y- during the corner change the position for serving.
The game has as many as six game modes, plus three training options. It is worth noting the very opportunity to train a team, where you can easily gain the necessary experience for future battles. Classic training (Training mode) is the usual "rolling" the ball, passing between partners, practicing corners and kicks on goal, but no one will bother you here, sparring partners are not provided here. A great opportunity to get used to the controls and feel the very style of the game. Next, go to the "Challenge mode". Here you will be taught on specific points in the game - taking free kicks and corners, playing in attack and defense, etc. Later, having learned the basics, you can practice for the best time or try free kicks with special obstacles, in a word, you will be prepared for real games. And finally, another training mode "Penalty kick". Everything is clear here - we are practicing strikes from eleven meters! When the training is completed, we proceed to the tournaments themselves:

And so, we have chosen a team, a tournament and an opponent. Next, we are offered to choose a stadium and weather conditions - snow, rain or normal weather, which does not particularly affect the quality of the lawn and the game. The team setting itself can be done either before the start of the meeting, or during the break, as well as by pressing the X key, but the ball must still leave the field. By selecting "Select squad" you can view the composition of the team and make adjustments, although by default the composition of players is optimal for all statistics, but there is also the "mood" parameter! If the player's emoticon smiles, and even bounces, then this player will give all the best on the field all the regular time and will have enough for an additional one, if necessary. And a player with a blue sad or even worse crying “smiley” will play like a sleepy fly and will “whine” even before the break. There will be no sense from him, and for this there is the possibility of replacing players. We move on and we have the “Formation change” parameter in front of us. Here we choose the arrangement and scheme of the players. From classic 4-4-2 to experimental 1-4-5. It all depends on desire and imagination. You can also specify the exact position of each player (!), as mentioned earlier. Simply put, we choose the style of the team's play - attacking, defensive, etc. The next parameter is "Adjust strategy". Here you can set up a strategic team plan that really works (!). A long pass across the field to the attackers, an all-out attack or a defensive plan, a game of counterattacks! Lots of options.
Among other parameters, where you can set the number of players, choose a side, change controls, view the table and previous results, it is worth noting the “Team colors” options. This can be seen in the game "Pro moves soccer". We are given the opportunity to choose either the default home or away kit, or choose our own color of shirt, shorts and socks. Choose your taste and color!
At the beginning of the match, the referee tosses a coin and if the side you chose falls out, then your right is to choose the side or the ball.
Before choosing the game itself in “Options”, you can set the match time from 3 to 7 minutes of playing time, the presence or absence of fouls and offsides, finally the difficulty level and even the referee for the match…

Time Up… You Win…

International super star soccer deluxe gave us every opportunity to choose the mode and style of the game to our liking in full expanded scope!
The whole thing is flavored with magnificent colorful graphics, even the colors of national flags correspond to reality. The music in ISSSD plays mainly between games (which is logical) and in some places resembles melodies from the famous "Side Pocket", which is doubly pleasant!
And finally, one should only envy those football fans who have never tried their hand, but are only going to hone their skills in this magnificent game, whose name is INTERNATIONAL SUPER STAR SOCCER and even DELUXE!
‹
›
Home
View web version