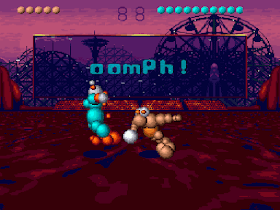 Genre: Action
Perspective: Side view
Visual: Fixed / flip-screen
Gameplay: Fighting
Published by: Accolade
Developed by: PF Magic
Released: 1994
Platforms: Super Nintendo (SNES), 3DO Interactive Multiplayer
Cool and original fighting game with characters made of balls. Despite such monotony of the material, each of them stands out for its unique character. They can, like fooling around in the arena, and be terribly aggressive. In combat, they have a variety of attacks and special moves. You will need to kick, push and fight with all your might, making your way to the top of glory and, most importantly, develop your fighting skills so as not to be taken by surprise by the formidable boss at the end. Getting used to the controls is difficult at first, but still possible. The graphics and music are excellent.
‹
›
Home
View web version