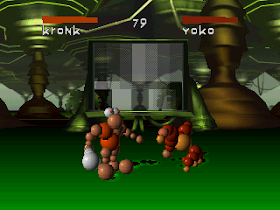 Genre: Action
Perspective: Side view
Gameplay: Fighting
Published by: Panasonic Software Company
Developed by: PF Magic
Released: 1995
Platform: 3DO Interactive Multiplayer
This is a very unusual fighting game, as the characters in the game are made of multi-colored balls. Almost, since the character in the game Vectorman. The version of the game for 3DO is the director's version, which means that it is more extended, and significantly different from its 16-bit counterparts. The game has 3 difficulty levels, nine unlike characters: Kronk, Turbo, Crusher, Divine, Tsunami, Boomer, Bruiser, Yoko, Zombie. With their super-strokes and tricks, which, by the way, are written in the game itself. There are several game modes. During the battle itself, various effects are applied, scaling and rotation around the field in pseudo 3D.
Yet these actions are seasoned with a lot of humor, which no one can leave indifferent. Fine music and soundtrack help to not notice the flying time spent behind the game console.
Otherwise the game can be called: Ballz ...