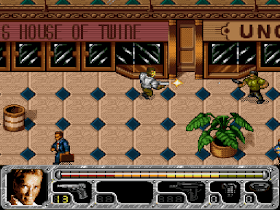 Genre: Action
Perspective: Diagonal-down
Visual: 2D scrolling
Gameplay: Shooter
Published by: Acclaim Entertainment
Developed by: Beam Software Pty.
Released: 1994
Platforms: Super Nintendo (SNES), SEGA Genesis / Mega Drive
Based on movie. Arnold Schwarzenegger in the role of an intelligence agent must overcome a terrorist organization. In other words, shoot everyone. Separate missions in the game are the same as in the film - skiing down the mountain, flying a fighter jet, otherwise you have to destroy enemies by conventional methods, which are given a pistol, shotgun, machine gun, grenades. At the end, there will be a boss fight.
‹
›
Home
View web version