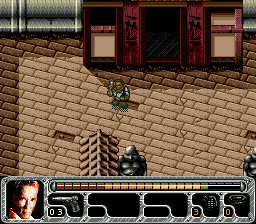 Genre: Action
Perspective: Bird's-eye view
Gameplay: Shooter
Published by: Acclaim Entertainment
Developed by: Beam Software Pty.
Released: 1994
Platform: SEGA Genesis / Mega Drive
This game is made on the film of the same name. You play for Schwarzenegger and you need to neutralize the terrorist group. In this you will be helped: flamethrower, pistol, rifle, uzi, grenades and mines. The game is done, in general it's good. Pleasant sounds. Music is not annoying, as it happens in some games. Management is made conveniently. Enemies are a bit blunt, especially in the first level, but as the game progresses with each level they become harder, but if you approach them correctly, then killing them will not be very difficult. The first-aid kits are fuller and if you make the right strategy, you can pass the level in one life. Speaking of lives. In each level there are 2 to 4 or even more, you just need to know the places where they are lying. Based on the above, the game is not very difficult. Below we will consider briefly the levels, which are only 9 in the game.

At the beginning of the level, you get out of the cold water and go into the house. But, of course, not through the front door, here you will climb through the window. Entering the house, from below you will find uzi, cartridges to it and a couple of enemies. Immediately I will say, do not fuck all up, peaceful people can not be killed, otherwise the mission will be failed. And the mission here is to find a card with a password and then find a computer from which you download the information you need, and then flush. Find a way out of the house and run down. On the enemies do not pay attention, just run down until you see the car standing on the road. That's all.

I called it this level, because here the mission is to get to the toilet and dunk the boss there. Go into the toilet, hollow out all the booths. The boss is easy here. Just come close and shoot from the uzi until it bends. But note that in this level, too, you can not kill civilians.

Here you need to look for the keys to the doors and in the end fight with the boss. The boss urinates, as well as in the previous level. Here you can not kill karatekas and people sleeping on benches.

Here you can water anyone you want. In this level, you need to find the switch and the key to it. With the help of a knife switch you will move the arrows and the train will go on another line, and you will be able to pass into the room in which there are any computers that need to be broken. But you will be hampered by enemies, and sometimes help. You, of course, will cut large circles in search of a key, but there is a secret passage. If you find it, then you will quickly pass this level.

Here you need to destroy the boxes with weapons on the pier and a couple more boxes on the ship. The level is quite simple, if you do not get lost in this labyrinth. The boss is not here. When you destroy the last box, the level will be passed.

Look for the keys, there are two types: from the doors and three from the bomb. Also in this level there is a labyrinth with a lot of secret passages. In short, the level is very muddy and it's hard not to get confused. Some doors can be destroyed if you shoot them (they must blink white). The bomb itself is in the house at the very top of the mine, you will pass this level.

The mission here is to clean the plant of terrorists. Going to the plant, wet all you meet. Going into the factory you need to look for cards from the doors. In the role of the boss of this level is a crowd of terrorists riding on the conveyor. The easiest way to kill them is from a flamethrower. So arm them in the course of the level.

This is the easiest level. Latte and blow up everyone and everything that you get along the way. The mission is to destroy 3 cars with a radiation sign.

So you got to the last mission. But here everything will not be easy! Crowds of opponents with a variety of weapons will try to dunk you. But you also do not give up and get to the boss floor by floor. You might think that this is the most difficult boss in this game, but if you use the help of the bass players, then this boss will pass without problems. Just do it so that the bashlichiki fired diagonally and in the place where these diagonals intersect, the boss stood. Well, get yourself uzi and shoot. And after that, watch the final shots!