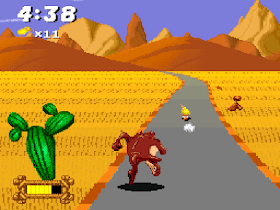 Genre: Action
Perspective: Behind view
Gameplay: Arcade
Interface: Direct control
Setting: Oceania
Published by: Sun Corporation of America
Developed by: Visual Concepts
Released: 1992
Platforms: Super Nintendo (SNES), SEGA Genesis / Mega Drive, SEGA Master System
A game featuring the Tasmanian Devil Taz. He knows how to run fast and spin like a top, so much so that he demolishes everything in his path (except for buses). The goal of each stage is to collect a certain number of Yellow Mouth Chicks within a limited amount of time. The game, oddly enough, looks more like racing than anything else. Single player game.
‹
›
Home
View web version