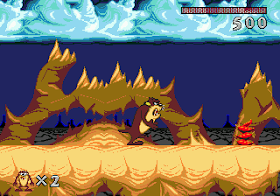 Genre: Action
Perspective: Side view
Visual: 2D scrolling
Gameplay: Platform
Published by: SEGA of America
Developed by: Recreational Brainware
Released: 1992
Platforms: SEGA Genesis / Mega Drive, SEGA Master System, Super Nintendo (SNES)
The hero of this game, known as the Tasmanian devil, sat once in his house and listened to the story of his relative about how in the distant past Tasmania was ruled by giant birds. As we know, this hero is a big fan of food. And so, listening to this story, he suddenly felt a strong fit of hunger, which made him rush to find a giant bird's egg in order to satisfy his rapidly growing appetite as soon as possible.
Taz-Mania is a 2D platformer with excellent graphics. Traveling through various scenic levels, you will have to jump a lot from platform to platform, collecting bonuses, increasing the level of vital energy or increasing the number of lives.