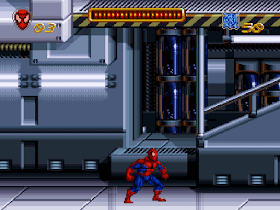 Genre: Action
Perspective: Side view
Visual: 2D scrolling
Published by: LJN
Developed by: Western Technologies Inc.
Released: 1994
Platform: Super Nintendo (SNES)
Game based on the animated series about Spider-Man. If we compare the game with other implementations of games on the Super Nintendo for this hero, then this one will be somewhere in the penultimate places. In the first place, you can put Spider-Man & Venom - Maximum Carnage, Marvel Super Heroes, in the middle of Spider-Man & Venom - Separation Anxiety, Amazing Spider-Man. The latter is definitely Spider-Man and the X-Men in Arcade's Revenge. So I don't think the game will be anything new. Once again, you need to calm down the raging villains who do not have to take over the world, kill someone, make chaos and implement some next crazy plan. We put on a mask and forward on the web into the thick of things with kicks and fists to disperse another bunch of bad guys and all sorts of villains.
‹
›
Home
View web version