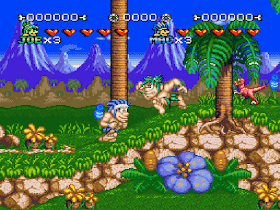 Genre: Action
Perspective: Side view, Top-down
Published by: Data East Corporation
Developed by: Data East Corporation
Released: 1994
Platform: Super Nintendo (SNES)
Super Nintendo Exclusive: Joe and Mac's New Adventures. This classic and funny series has been on many consoles, but the second one can only be found on this console. Our heroes are called to the next task. Someone has stolen some sacred trinket and, of course, the best are called in searches. Apparently, it is our heroes who are masters of waving clubs, the rest have not yet developed their brains to that. The gameplay is simple but very fun. Joe, either Mac, or a duo make their way through the most difficult path of several levels. Joe & Mac 2 is a little different from the first game. The game has become much more interesting. Now you can choose the order of the levels. The characters have the simplest set of moves. Enemies are very diverse and great for every level - it makes you keep playing and not quitting the game. Giant plants, dinosaurs, yeti, and any other prehistoric monsters you can think of are here. At the end of the level, big bosses are waiting and it's very fun to fight with them. The two player mode adds replay value. The graphics look great. Each level is replete with lush details and colors. The habitat of various creatures is interactive and amazing in every way. Each opponent has a lot of funny expressions that cause a smile and laughter. Many players every time downloading this game, did not stop being amazed by the beautiful graphics. Data East went all out with this title with a great product. If you are a fan of 2D graphics, don't let this game pass you by. The music is great for every level.
‹
›
Home
View web version