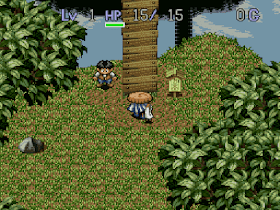 Genre: Action, Role-playing (RPG)
Perspective: Top-down
Pacing: Turn-based
Gameplay: Roguelike
Setting: Fantasy
Published by: Chunsoft Co.
Developed by: Chunsoft Co.
Released: 1995
Platform: Super Nintendo (SNES)
There are things that are, so to speak: unpopular, incomprehensible, unrecognized. Fushigi no Dungeon 2 - Fuurai no Shiren is from this category. But, this game, which was not awarded localization in the USA, is interesting and beautiful in its own way. This priceless gem and piece of high art was given to us by the Super Nintendo and represents the roguelike genre. There are not so many roguelikes on consoles, so it is better to compare the game with other well-known RPGs, and even though it may not be such a giant as, for example, Chrono Trigger, this is not a reason to consider Fushigi no Dungeon 2 bad and uninteresting. This should not mean that the game does not have a fascinating story, amazing music, great graphics and original, unlike anything else, gameplay. After all, Fushigi no Dungeon 2 - Fuurai no Shiren has it all! This is a great game in every aspect! The game is a continuation of Torneko no Daibouken on the same system and implemented a little easier. The work itself is permeated with the atmosphere of feudal Japan. Fascinating music, the most beautiful graphics, which can only be compared with such giants in this indicator as Star Ocean and Tales of Phantasia. Living trees make you admire them again and again. You play the role of Shiren, who is an itinerant adventurer. Shiren does not travel without a goal. This time, he and his pet Koppa are on a journey to investigate the legend of the Golden Condor, who is said to live on top of a non-criminal mountain in the village of the ancients. Not a single adventurer has yet been able to reach the top to verify the veracity of the myth. As Shiren, you travel from village to village, passing forests, mountains, caves, rivers and other places inhabited by unfriendly wildlife. And so up to the treasured mountain. When you die, dungeons are randomly generated. The game is well balanced, you even have to deal with such an inevitable phenomenon of many travelers as hunger. The combat system is very original and original, which can sometimes be called an "elegant strategy". The opportunities that are provided may surprise many avid players who believe that they have already seen everything in their lives. And the game itself is one solid lump of originality and originality with a completely non-trivial concept. The game has managed to continue on a wide variety of systems, such as N64, DS, DreamCast, PSP, Wii, and is still an incomparable implementation and embodiment.
‹
›
Home
View web version