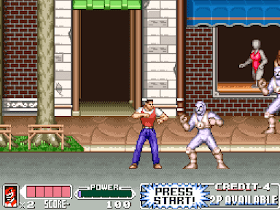 Genre: Action
Perspective: Side view
Visual: 2D scrolling
Gameplay: Beat 'em up / brawler
Setting: Sci-fi / futuristic
Published by: Bandai America
Developed by: Natsume Co.
Released: 1995
Platforms: Super Nintendo (SNES), SEGA Genesis / Mega Drive
What the game is already worth playing for is the excellent musical accompaniment of such a genius of music as Hiroyuki Iwatsuki. His first level track Angel Grove already shows the genius of this composer. Graphics, as in other games from Natsume, at a very high level. Combat has changed slightly from the first Power Rangers game on this console. The most positive thing is that the game has been adjusted to the two-player mode, saturating it with acrobatics and jumping from one side of the location to the other. Such an action looks on the positive side, and there is a sufficient dynamism of everything that happens. Also in this version, the developers abandoned the combo system and any captures that were present in the first game, and now a few kicks or slaps are enough to destroy enemies. Now the entire combat system is built from a special line, which needs to be replenished by destroying enemies and knocking out special icons from them. The ability to morph into Power Rangers also depends on the same line. This line adds little variety to the transformation, if in the first game the Power Rangers differed in the addition of weapons, now here they are mostly different only in color. Still, throwing enemies was much more pleasant. There are no missions with Zords at all. However, the game has prospects and good enough pluses to enjoy the gameplay. A good addition to the first part with the possibility of playing in two-player mode.
‹
›
Home
View web version