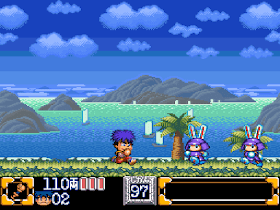 Genre: Action
Perspective: Side view
Visual: 2D scrolling
Art: Anime / Manga
Published by: Konami Co.
Developed by: Konami Co.
Released: 1993
Platform: Super Nintendo (SNES)
In the 16-bit era, no one could deny that Konami was making one hit after another. Who doesn't remember the Castlevania or Contra series, great flying games like Axelay, Gradius or Parodius without a lot of Love!? However, in the shadow of these great games was Goemon. This is very embarrassing! Goemon 2 can be regarded as one of the best games in the series. From the plot it follows that a foreigner named Magginesu visited Japan to wreak havoc in the country. This news reaches the ears of Goemon and his comrade Ebisumaru. The ninja Sasuke joins them. All of them are initially available for selection and have different abilities. Sasuke is the fastest of the team. Ebisumaru starts the game with the most money and his weapons seem to be more powerful when attacking numerous enemies. In addition, each character has his own throwing weapon. The game itself is arranged in the spirit of Super Mario Bros. 3. Your attention is presented to the map on which the character moves to fulfill his mission. In cities, you can find many shops for replenishing health and improving equipment. The gameplay itself has some of the best features of the platformer genre. The first stage will be a simple walk to learn the intricacies of management. In the later stages, it will get more and more difficult. For example, you will have to escape from a giant snowball, jump on the back of a dragon, and also explore some unique locations. The graphics in the game are good. Continuing their great tradition of making great music, Konami should bring their great experience in this regard to Ganbare Goemon. The series has its own unique themes and songs. Some of them are so good that you want them to never end. Goemon 2, along with the first game, can be considered the best in the series. Subsequent games have a different style from the first two. All fans of console games from Konami should play this series, this is one of the Japanese implementations that deserves to be known. I don't think you will regret it.
‹
›
Home
View web version