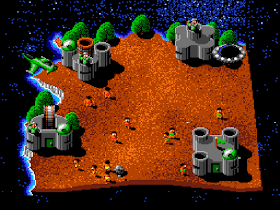 Genre: Strategy
Perspective: Top-down
Pacing: Real-time
Published by: Imagineer Co.
Developed by: Sensible Software
Released: 1993
Platform: Super Nintendo (SNES)
The famous 16-Bit strategy game looks better on the SNES than on the Sega Genesis. Improved graphics and sound effects, added new music tracks. Also in the Super Nintendo version, the help button is more elaborated, suggesting various intricacies of the game. Other new features have been added, so for the best experience, be sure to play this version on the Super Nintendo. This game includes resource management, development, and what is most interesting, each level is a separate island where you must build a civilization and defeat the enemy. It is also a remarkable feature of the game, no doubt, that at each level you build a civilization almost from scratch, from the Stone Age, gradually moving into different eras up to the present day. Depending on the initial resources, the game can proceed in different ways. Few people can be landed on small islands, they will gradually develop, but enough landings must be landed on large ones, because the more people, the faster they increase the population and the faster you will capture neighboring lands and increase your empire!
‹
›
Home
View web version