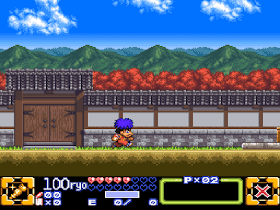 Genre: Action
Perspective: Side view, Top-down
Art: Anime / Manga
Gameplay: Arcade
Published by: Konami Co.
Developed by: Konami Co.
Released: 1994
Platform: Super Nintendo (SNES)
The third installment in the series, and for some, the best Goemon on the SNES. The combination of styles like platforming and adventure like Zelda makes for a truly entertaining game. Management is very convenient. The graphics are great for Snes. The characters are well drawn, down to the smallest details. Optional animation is also good - some of the inhabitants of the game wipe their faces with a handkerchief or comb their hair. These little things make the game much more attractive. A wide variety of backgrounds is also pleasing to the eye. During some of the battles, the potential of Mode 7 was well used, and as a result, some episodes look fantastic. The sound is done well. The combination of traditional and modern Japanese music does the trick. The story is told through various dialogues and cut scenes that are great to entertain and amuse. The first two Goemons on the Snes were largely action-adventure games. This part is the complete opposite. The adventure style is more prevalent here. As a result, the game has much more atmospheric depth. If you are interested in passing this game, you must have good reflexes and a sharp mind. One of the strongest features in this game is that you have four characters at your disposal. Each of them has their own weapons and special abilities. Among the characters are a small and fast ninja robot created by a wise old man and a ninja girl with green hair who can turn into a mermaid. I think for their sake it should be interesting to play this game. The inclusion of four different characters makes the game even more interesting and fun. You have to constantly switch between them in order to use the unique abilities of each in certain places. One of the nice innovations of this part is the ability to get an experimental Mech during the game, a bit like Majitek Armor from FF6. The mech allows you to get to some remote areas and defeat enemies with little effort. In addition, you can get new weapons for him, such as a flamethrower and more. The last thing that made the game a masterpiece was the amount of humor. Even if you don't speak Japanese, many of the visual scenes will make you laugh for most of the game. The game is shorter than the previous parts of this trilogy, and it also lacks the mini-games that were very common in the first two parts. Certainly, this trilogy deserves everyone's attention from all players and especially those who appreciate the classic series from Konami.
‹
›
Home
View web version