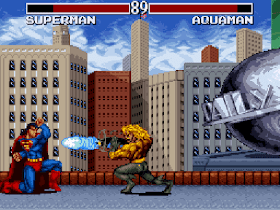 Genre: Action
Perspective: Side view
Visual: 2D scrolling
Gameplay: Fighting
Published by: Acclaim Entertainment
Developed by: Blizzard Entertainment Inc, Sun Corporation
Released: 1995
Platforms: Super Nintendo (SNES), SEGA Genesis / Mega Drive
Decent fighting game from Blizzard. One unfortunate day, Darkseid launched an invasion of Earth, destroying a military base. One of the representatives of the Justice League (we choose it ourselves), seeks to stop the atrocities. But the forces are not equal, so he seeks support and advice from other members of the League, and for some reason they attack him. Having dealt with all his "colleagues", our hero realizes that these are not his friends, but clone androids. Inspired by new information, he cracks down on Cheetah and Despero, who unanimously tell him about Darkseid. Only by killing his clone first, and then the villain himself, can you free your friends and stop the invasion of Earth.
Each hero has a good set of moves, the style is reminiscent of Samurai Shodown. Battles are fought in 9 different locations. Some have a gloomy atmosphere, where a lonely wind howls and the rustle of grass is heard. The fights are up to two victories and, in general, the game makes a good impression. DC's coolest superheroes are featured: Aquaman, Batman, Flash, Superman, Green Arrow, Wonder Woman, as well as the previously named three of their enemies. You can play with two.
‹
›
Home
View web version